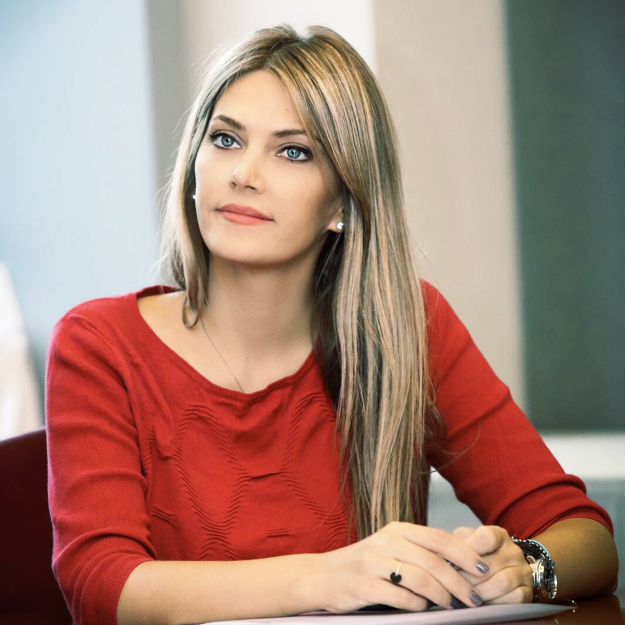 Born and raised in Thessaloniki. In 2001 she was President of the School of Architecture Students’ Association and by 2002 she was already the youngest member to be elected in the Thessaloniki City Council. She is also actively involved with the “Love 146” movement, an international organisation against child slavery and exploitation and a member of “Panagia Soumela” foundation. In the 2007 national elections she was elected as a member of the Hellenic Parliament for the first district of Thessaloniki. In 2004 national elections she was the youngest candidate standing.
During her term in Parliament, Eva has served as a member of the following Parliamentary Committees: Standing Committee on Cultural and Educational Affairs, Standing Committee on National Defence and Foreign Affairs and Special Permanent Committee of Greeks Abroad. She is also a member of the Black Sea Economic Cooperation (BSEC), of the NATO Parliamentary Assembly and of the Parliamentary Assembly of the Union for the Mediterranean. She has represented Greece in a host of international conferences and special missions abroad.
She obtained her undergraduate degree in architecture and engineering from Aristotle University of Thessaloniki. In 2008, she was awarded a Master of Arts in International Relations by the University of Piraeus, Department of International and European Studies. Eva is currently studying towards a PhD in International Political Economy with the same university. She also took courses in Basic Principles of Economics at Harvard University in 2012.
From 2004 to 2007 Eva worked as a journalist and anchorwoman for Mega Channel, one of the most important TV channels in Greece. She also studied journalism in Workshop for Professional Journalism, a private college in Athens before becoming a member of the Journalists’ Association of Athens. Eva’s father, Alexandros Kailis, is an Istanbul-born mechanical and electrical engineer. Her mother, Maria Ignatiadou, of Asia Minor Greek descent, grew up in Imathia. Eva has a younger sister, Mantalena, who is a lawyer.