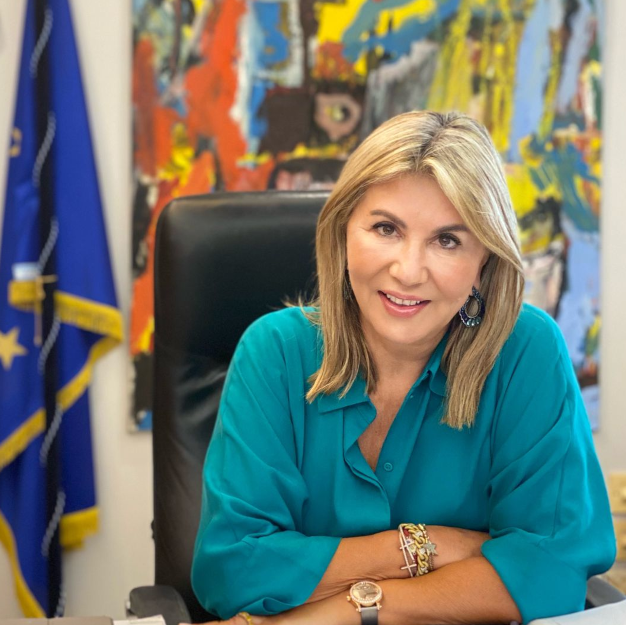 Zetta (Zoe) M. Makri was born in Thessaloniki, graduated from the Greek-French School of Volos “Saint Joseph” and studied, with a scholarship, at the Law School of the National Kapodistrian University of Athens, from which she graduated with honors. She continued her postgraduate studies in European and Community law at the University of Cambridge in the United Kingdom.
She is a lawyer at the Supreme Court and a member of the Volos Bar Association. From the beginning of her professional career as a lawyer, she developed intense trade union activity and was constantly elected, first in votes, advisor to the Management of the Volos Bar Association. She served as Secretary of the Bar Association of Volos, from 1996 to 1999.
In the Parliamentary elections of 2000, she was elected as a member of the Greek Parliament from the district of Magnesia, with the party of New Democracy. She was re-elected in the 2004 parliamentary elections, was sworn in in April 2013 as a member of the Greek Parliament and re-elected in 2019. She served as Deputy Minister of Health from June 2013 to June 2014.
In July 2019, she was elected as Chairman of the Special Standing Committee on Regions and Chairman of the Subcommittee on Island and Mountain Areas of the Greek Parliament, while she was a member of the Standing Committee on Economic Affairs and the Standing Committee on Educational Affairs. Also, from July to December 2019, she participated as a member in the Committee for the Revision of the Constitution of Greece. She is also the Chairman of the Parliamentary Group of Friendship among Greece and Mexico and a Member of the Parliamentary Group of Friendship among Greece and Japan.
During the period 2004-2007, she was Chairman of the Committee on Public Administration, Public Order and Justice. At the same time, she was a member of the Parliamentary Committee on Educational Affairs, the OSCE Parliamentary Assembly and the Committee of Inquiry into Armaments Programs TORMI I.
She was General Secretary of Gender Equality from August 2012 to March 2013. In November 2010, she participated as head of the Association “NEW MUNICIPALITY, NEW BEGINNING”, in the municipal elections of the Municipality of Volos, and from January 1, 2011 , was the leader of the major Minority in the specific Municipality. In 2009, she was appointed Deputy Secretary of the Agricultural Sector in the party of New Democracy and, subsequently, Deputy Secretary of Political Planning in the party.
In April 2015, she was elected President of the cross-party and pan-Hellenic Women’s Association of Greece, a position she held for three years. At the same time, in the same year, she was appointed General Secretary of the Board of Directors of the “Konstantinos Karamanlis” Foundation for Democracy.
She has strong social, voluntary and charitable activities. She has dealt with issues related to improving the quality of life of women, violence against women and trafficking in human beings. She was a founding member of the club of friends of the General Hospital of Volos, named “Achillopouleio”, a member of the Soroptimistic Club of Volos, “THETIS”, while she is the coordinator of the Volos branch of the Panhellenic Sports Association “Kallipateira”.
Since January 5, 2021, she is Deputy Minister of Education and Religious Affairs, responsible for primary and secondary education as well as special needs education and training.
She has two sons, Michalis Theofilou – Makri, Mechanical Engineer, and Konstantinos Theofilou – Makri, Chemical Engineer – Economist, a granddaughter and a newborn grandson.